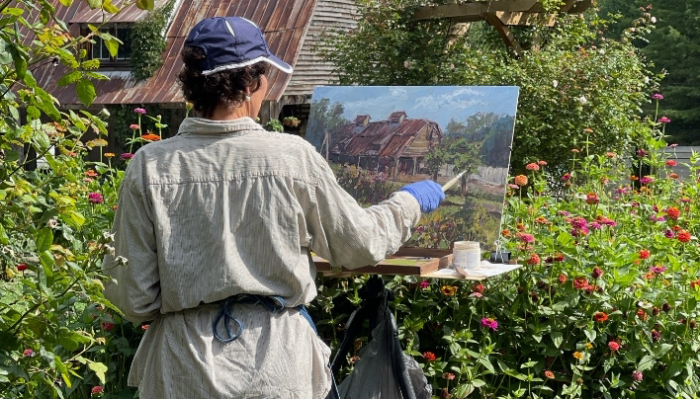 Enveloped in the great outdoors, Jennifer Mills is blessed with endless treasures to paint.
Dec 15, 2021

Jennifer Mills: She blazed a trail in golf, now she is growing as an artist

This is a story about beauty. Specifically, how in a world desperate to be brightened, one woman is grounded by an inner peace, mountaintop views that stretch endlessly, and faith deep within her soul that unleashes softly told stories that are rich in texture and colorful in emotions.

It is a skill set Jennifer Mills brought to her television golf assignments in another lifetime. Today, her stories are told with brush and canvas.

“It is a pastime that allows you to get lost for hours,” said Mills. “I have always been fascinated by interesting stories; that’s what drew me to TV. But what is beautiful about painting is that it’s just another form of story-telling.”

What infuses greater flavor into Jennifer Mills’ story – how she went from the glitz and warm spotlights of television to the tranquility and awe-inspiring vistas of her mountain home in North Carolina – is that it all came on her terms.

Seven months pregnant when she was one of the first hires by The Golf Channel to anchor “Golf Central” when it debuted in 1995, Mills had the courage to go where few women were employed – into the world of golf media. Some 12 years later, divorced and the mother of two, Mills was preparing for an early morning run when she mistakenly slipped into her son’s sneakers. The shock swept through her body.

“When did you get so big?” she said to her son, and down to her very core Jennifer Mills, who also has a daughter, knew she was done with the 24/7 frenetic world of TGC. Not with golf, mind you, because this South Carolina native has played the game most of her life and was imbedded in a community at her alma mater, Wake Forest, where golf is a way of life.

“I could play the game every day,” she said. “I follow the game and I love golf. Painting is like golf; you will never be perfect at it, but we never stop trying to grow as an artist or golfer.”

The brilliant shine to Mills’ world, however, goes deeper than her oil paints and brushstrokes that “are fast, with a lot of energy,” she laughs. Enormously strong in character to carve out a career in television (before TGC she worked for the Travel Channel; after TGC she worked golf broadcasts for NBC Sports and the Masters), Mills is to be admired for this second chapter to her life.

“I’ve had not one, but two lives as a story-teller,” she laughs.

That there is such order to her life is what Mills celebrates most. Remarried to a gentleman who cherishes their world of solitude in the mountains (there is no internet in the home and who among us wouldn’t mind that?) and practices the artistry of landscape design, the couple is within a few hours of their five children and 12 grandchildren, and Jennifer’s parents.

When you spent a good chunk of your life traveling 25-30 weeks a year, you cannot put a price tag to being so anchored. What enhances the comfort is a vibrant artists’ community in North Carolina that has swept Mills into a world of peers and mentors such as Sarah Sneeden of Bevard and Jim Carson in Saluda.

They are award winners who’ve painted for decades – in Sneeden’s case “55 years,” said Mills – so she can understand why the expression “emerging artist” is used so often to describe her.

“You’re still considered a ‘newbie’ if you are under 10 years . . . but that’s the industry,” said Mills, who loved to draw as a child but never painted until about 2015 when she started spending more time with her recently widowed mother-in-law.

“She loved to paint with oil. I would say, ‘OK, Marie, what would you like to do today?’ She’d say, ‘Let’s paint,’ so we would. I thought I was keeping her company, but unbeknownst to me, she was teaching me a lifelong skill. She gifted me the passion.”

Mills is devoted to plein air, that is, painting outdoors, so her country landscape is a treasure field of subjects – woods, barns, fields, waterfalls, flowers, and mountain tops as far as you can see. “You unload your backpack, and you paint what you see,” she said. “My art is an extension of how I see things.”

But as much as she savors brush to easel in the great outdoors, “I never want to stop growing as an artist,” so Mills enrolls in classes, works with her mentors, and embraces all levels of learning. She won the Betty Taylor Award for Emerging Artists in 2019 and put the grant toward continuing education. (Her website is jenniferspots.com.)

Mills paints for the love and spontaneity, for the camaraderie it invites within a vibrant arts community, for the desire to show the beauty in our world. If her work reaps honors, as it did with a Best of Show in one competition, Mills will understandably feel blessed.

But many who paint out of sheer joy feel as Mills does, “that you’re putting yourself out there and I do get nervous (about people’s reaction), but it’s a good nervous.”

There is, however, a starting point that speaks to the balance in Mills’ world. With a blank canvas in front of her, “the first move I make is a cross,” she said. “My way to say thank you for this beautiful and unexpected gift and to ask for inspiration in creating something that brings joy.”