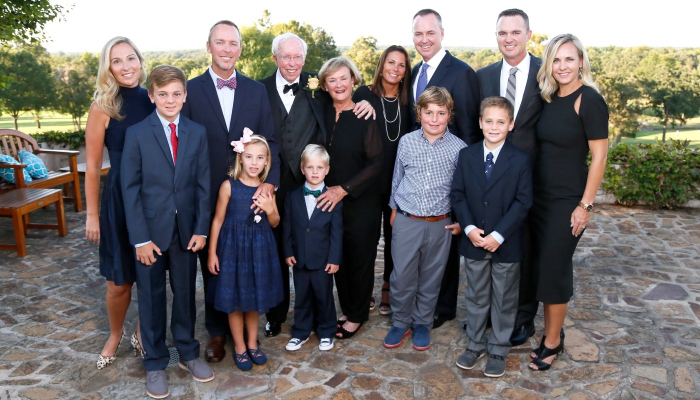 Jerry and Karol Cozby surrounded by family members in 2016 at Jerry's induction into the Oklahoma Golf Hall of Fame. Cary and wife Stacy at left with son Banks; Chance and wife Erica at right with sons Campbell and Catcher; Craig and wife Cassie are in the back with their children Charlye and Canyon in front.
May 11, 2022

Oklahoma golf roots, but Cozby family's love of the game touches us all

It is a family story that is told with great warmth, for it checks all the boxes to what is at the essence of a marriage and a commitment to one another. Love. Faith. Hope. Vision. Dream. Golf.

Well, yeah, golf. Jerry Cozby loved the game and was going to make it his life. Karol Cozby, his young wife, was OK with that and if golf was at the center of her husband’s world, well, it would be the focal point of hers, too.

Only why did it have to take these two born-and-raised Texans on a long car ride from the San Antonio area to that place in . . . where was it? Oh, yes, Bartlesville. It was in Oklahoma, of all places.

“My mom cried all the way to Bartlesville,” laughed Chance Cozby, the youngest of three boys born to Jerry and Karol. “My father told her, ‘I will just do it for a short time and then we’ll move back to Texas.’ ”

That was in 1969, so Chance Cozby pauses briefly before adding the exclamation point to the story.

“My mom is 76 and she’s still in Bartlesville (53 years later). Loves the club, the people, the town. She’s never wanted to leave.”

Digest that for a moment and it’s difficult not to give a tip of the cap to Jerry Cozby, who died at 79 in August of 2020. Seems like he knew what he was doing, eh, when he left that job at Oak Hill CC in San Antonio and accepted a new position at Hillcrest CC in Bartlesville.

But if you are to savor all the accolades that were circulated about Jerry Cozby’s beautiful life, you’d likely understand how he’d tell you the magic ingredient to all of it was golf. It is our most mystical, our most captivating game, and if Jerry Cozby truly believed that head professionals had one job – “to make sure all amateur golfers, whether at public courses or country clubs, are having a good time and enjoying the game” – then he aced his craft.

He also let golf’s magic sift through his family – Karol, of course, and sons Cary, Craig, and Chance – to such a masterful scale that Ken MacLeod offers the highest of praise. “The first family of Oklahoma golf,” said MacLeod, who has the credentials. He was the golf writer at the Tulsa Tribune from 1987-92 and since 1993 has owned and published Golf Oklahoma magazine. Oh, and for good measure he is also Director of Oklahoma Golf Hall of Fame.

So, when MacLeod speaks of Jerry Cozby’s dignity – “A character. Legendary. Just the warmest, nicest guy who had a huge influence on golf in the state.” – it resonates.

It affords a little sliver of the spotlight to shine on Southern Hills Director of Golf Cary Cozby, who followed in his father’s footsteps in 2016 when he was named PGA Professional of the Year. Jerry had won it in 1985 and they are the only father-son winners of the prestigious honor.

But the PGA Championship coming to Cary’s place of work in Oklahoma should touch a button in all of us, even if a foot has never been stepped inside that state.

Yes, Oklahoma is where Jerry helped spread a passion for golf, where three Cozby lads worked mornings and played in the afternoon at Hillcrest or played in the morning and worked in the afternoon. It is where Cary honed his game and took it to the University of Oklahoma, a decision that was also made by Craig (a two-time All-America) and then Chance. And Oklahoma is where the most passionate golf fan of them all, Karol, was shuttle driver, probably the equipment manager, and definitely the golf statistician, if for no other reason than her husband was too nervous to watch his boys play.

Ah, but when Karol would produce the scorecard, marking which fairways were hit, where the errant drives went, greens in regulation, and if approaches went long or short, it was studied by Jerry Cozby.

“Dad would pore over it and say, ‘Looks like you hit it left, so we’ll work on that,’ ” said Chance.

Oklahoma, all of it, but no matter. It could be anywhere, because it is everywhere, this wildly intoxicating passion for golf that in countless cases runs through families with unrelenting love and where you can envision some brother or sister emphatically stating what Chance Cozy does.

“The game of golf has done everything for us,” he said. “And in different ways.”

He is Executive Director of the Thunderbirds, host organization of the PGA Tour’s most well-attended tournament, the Waste Management Phoenix Open. Middle brother Craig, arguably the best golfer of the three, the one who gave the pro game a shot, is a sales rep for Ping based in Missouri.

Divided by state borders, they are united forever by the game of golf which “was never pushed on us,” said Chance. “It just kind of happened that it became part of our lives. We grew up on the golf course (Hillcrest) so we were fortunate. But we all just loved it.”

Study the dynamics of the story and smile, for we all know families that make this great game central to their lives. Watch the PGA Championship next week and smile some more for the Cozbys who personify what it is to love this game and treat it with dignity.