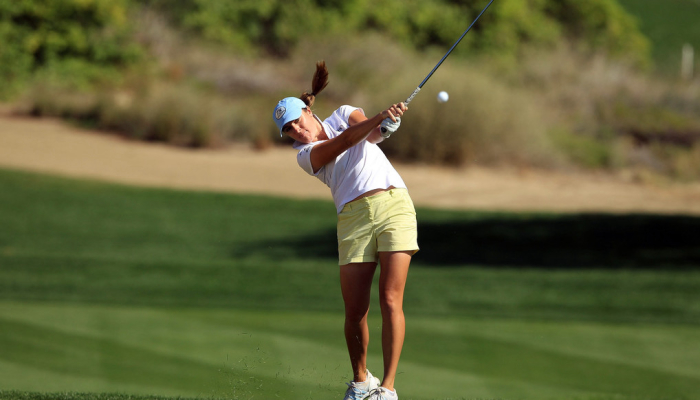 She left the competitive arena, but Walshe is very much in the game

Perspective. Appreciation. Humility. They are valuable commodities, but especially so when they are in the grasp of an engaging personality who maintains great passion for her community.

In the case of Alison Walshe, the community in question is golf and few have authored as intriguing a journey as she has. Now 36, the Ireland-born, Westford-raised Walshe misses the LPGA world from which she stepped away after the 2018 season. But committed to the game, Walshe has maintained golf ties that have allowed her a lofty vantage point where her thoughts warrant great respect.

And many of these thoughts are gleefully consistent with those who trumpet the positive momentum being plowed by the LPGA. “There’s been so much progress,” said Walshe.

“Nelly (Korda, No. 1 in the world) has been huge for the game. With purses increasing, the transition to a new commissioner (Mollie Marcoux Samaan), and this whole movement about awareness in the world about women in sports, it is only helping the LPGA.”

In 2012, Walshe, then in her third season, played in 22 tournaments that required travel to eight different countries. Soaring those highways in the sky to Australia, Canada, France, England, Malaysia, Taiwan, and Japan – all in addition to U.S. tournaments, of course – Walshe never felt worn down.

“Booking a flight was like making a phone call,” she said.

As for those who grumbled about so many trips to Asia, Walshe never understood that. What she understood was solid business sense.

“It goes back to marketing,” she said. “There is a huge fan base there, great support. We wouldn’t be where we are without their markets.”

So, at a time when some PGA Tour players could make millions without even using a passport, Walshe – like so many of her peers – continued to travel widely until after nine seasons she took her life in another direction.

She returned to Massachusetts, joined Hexagon Capital Partners and is a strategic relations manager immersed in the world of finance. The business intrigued her when she played and always Walshe would pay attention to marketing opportunities and study trends and where corporate America was directing their monies.

Not as much went the LPGA’s way, Walshe concedes, but that is changing in a positive manner. Whereas in 2012 Walshe had 27 tournaments to choose from and total purses came in at $47 million, the numbers have inflated nicely for 2022 – 34 tournaments with a total of $85.7 million.

“I look at that and think, ‘Damn, I wish this was my rookie year,’ ” laughed Walshe. “But the gains are in sponsorship opportunities, too. Hopefully, the girls recognize that it’s out there. Every corporation is invested in D&I (diversity and inclusion) and the message to the girls is, you can get it.”

To know of Walshe’s tale of perseverance is to appreciate why she stands as a role model for young women golfers. She went out and got it.

She started at Boston College but saw a transfer to Tulane as a forward step that would benefit her competitively and in 2004-05 it certainly felt that way.

But when Hurricane Katrina devastated the New Orleans area in August of 2005, havoc ensued. Walshe and teammates were shipped to the campus of SMU in Dallas. Dysfunctional as that was, it grew worse when in December of 2005 Tulane disbanded the women’s golf program.

Walsh was on the move again – to the University of Arizona, her third college program and a fourth collegiate campus. It was a disjointed adventure that could have soured her, but Walshe never let it get her down. Rather, she thrived.

In 2007 she won the esteemed North & South Women’s Amateur in Pinehurst, N.C., then in early 2008 Walshe triumphed at the Harder Hall Invitational to secure a spot on the Curtis Cup team. A memorable experience was made even more so by the venue, the Old Course in St. Andrews, and the magical 4-0 weekend that included three triumphs alongside Stacy Lewis and a singles win.

Never did Walshe get into the winner’s circle on the LPGA, but she was competitive for a lengthy time and widely respected for her demeanor and sense of awareness to the big picture. She has carried that with her into her post-LPGA life where Walshe is committed to her finance studies and to volunteering her time to Mass Golf to consult about marketing and communications and to initiatives such as Youth on Course.

So much about golf thrills her these days – “It’s become super mainstream, so cool with so many clubs and organizations. Social golf is very trendy,” she said – but it’s the LPGA that is always going to own her heart.

Walshe admires the progress Megan Khang, another Massachusetts product, has made. Just 24, the Brockton native has played six seasons already and while she hasn’t won, there have been two Solheim Cup teams made. She has also been consistently inside the top 40 in the year-long Race to CME standings.

“She just needs to stay in her own lane,” said Walshe. “She seems to know what works and I think it’s just a matter of time.”

But the time is now in some wonderful ways for the LPGA and Walshe is thrilled. The year-ending CME will feature a $7m purse, the AIG Women’s Open Championship will be $6.8m, the U.S. Women’s Open $5.5m and a handful of others will be between $4m and $5m.

“Just a lot of right things are happening,” said Walshe, who should know. She’s been doing a lot of things the right way for years.