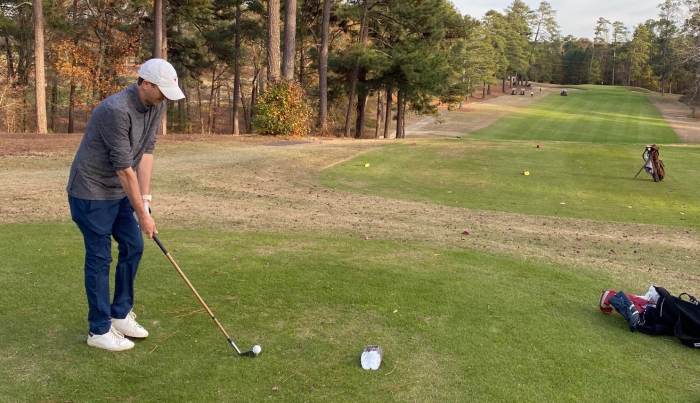 Michael Solomon sets up over his tee shot on the first hole of his first round with hickory . . .
Oct 6, 2021

To suggest that Old Tom and Young Tom themselves walked from amid the trees to smile their approval at the purity of Mike Solomon’s tee shot at Southern Pines Golf Club last November would be slight embellishment.

Onlookers, after all, suggest it was Bobby Jones and Gene Sarazen.

Eyewitnesses at the tee weren’t sure, however. That’s because Solomon couldn’t take his eye off his big, soft fade that landed in the fairway and Jay Mickle was captivated by what he saw on his new friend’s face.

“It was pure glee, such enthusiasm,” said Mickle.

Welcome to the world of hickory golf, which might not rate as that big a deal if you played golf before 1930. But seeing as how very few of us fit into that demographic, we’ll take Solomon’s word for it and double-down with Mickle’s that the act of striking a golf ball with a hickory club is a sort of spiritual awakening.

“The first swing I ever made with a hickory club, last November, Jay handed me the equivalent of a 4-iron, and we were on the 16th hole, a short par-4, and I hit it down the middle, maybe 180 yards,” said Solomon, 37.

“A picture was taken and I’m smiling, ear-to-ear astonishment to see the shot shape, left-to-right. Next shot (again, hickory, maybe a niblick, or 9-iron), I almost put the ball in the hole. I’m laughing, Jay’s laughing . . . ”

And in the short time it took Solomon and Mickle to reach 17 tee, the ranks of those who embrace a game of golf with hickory had been increased by one.

“I got him at the right time,” laughs Mickle, who saw something in Solomon that warmed his heart.

“His enthusiasm for golf is special. He’s one of the most enthusiastic people I’ve ever met and that’s a wonderful thing. It will get you a long way.”

Here, we pause to explore how there is much more at work in this story than a golfer’s discovery of wooden-shafted golf clubs which were the norm until the mid-1920s, at which time steel started to dominate.

It’s enlightening to know there is a large contingent of golfers who enjoy hickory and that the Pinehurst, N.C., area – where this story was given birth – is arguably the hickory capital of the world. It’s also worth noting that competitive tournaments are plentiful and growing more popular by the year.

But at the heart of this story is proof again how golf delivers magic, how it can galvanize relationships and connect strangers in a most serendipitous manner.

Consider the love that Mike Solomon and his wife, the former Kim Donovan (a standout golfer alongside Jon Curran and Keegan Bradley at Hopkinton High School and then at Duke), share for one another and with golf. When the work-at-home landscape stretched into winter months last year, Mike and Kim chose to set up in a rental property in the Pinehurst area and that allowed “our dog to be happier,” laughed Mike, and their golf games to make occasional winter appearances, something that wouldn’t have happened in Boston.

Consider further that when Mike and Kim strolled to the first tee at Southern Pines GC one November day, they had never met the man who was there with hickory clubs and a smile on his face.

And, yet, owed to the supernatural power of golf, they were such good friends 15 holes into their game that Jay Mickle entrusted his mashie to Mike Solomon and what overflowed was indescribable joy.

Yes, for the simplicity of a well-struck shot with hickory, said Solomon. But more than that, for the fortuitous friendship that has flourished from such happenstance. “He is,” said Solomon, “a force of nature.”

They are a generation apart and have livelihoods that are not related – Mickle is a farrier; Solomon is in the financial world – but owed to their love of golf, they have shared hours of conversation, visited each other’s homes, been mentor (Mickle) and student (Solomon) in the workshop above a barn where hickory clubs were crafted, and connected in a way that warms the soul.

Absorbing all the advice Mickle sprinkled upon him, Solomon said his comfort zone grew the more he played hickory. The first round produced a 110, then 100, 95, 90 and “in the fifth time, I shot 84 in a tournament.” He didn’t win the grand prize of 50 pounds of sweet potatoes, but Solomon knew he was hooked.

“My passion for golf is less about the history about players and more about architecture,” he said. “I’m drawn to courses.”

He listened to what Mickle told him, that hickory is meant for the ground game, for courses where the run-up shot is invited, and not for a lot of modern courses where you need to fly it over hazards and bunkers.

“It’s endlessly challenging. The penalty for a mishit with hickory is severe,” said Solomon.

“But I embrace the strategy, learning to navigate the risk and maximize positioning. To forget the score and just hit a shot onto the green with hickory is such joy.”

Mickle hears that and smiles, because he said something similarly to himself about 16 years ago when he moved to Southern Pines and hit the sweet spot on his first swing with hickory. Ever since Mickle has urged those who share the passion to spread the love.

“And Michael is such an ambassador,” said Mickle.