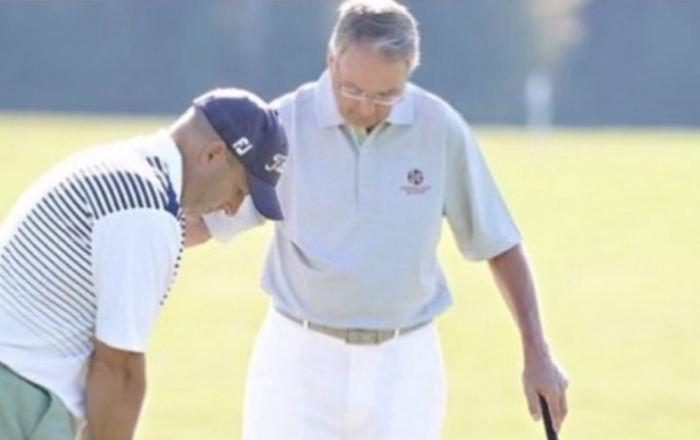 With an enduring thirst to teach, Tom Cavicchi is at home on the range.
Nov 24, 2021

Funny thing about that set of keys Scott Hawley has to a place where he works part-time as a golf instructor.

“I’m not sure I’ve used them to unlock anything,” he laughs.

That’s because Tom Cavicchi is always already inside at the Harmon Golf & Fitness Club, a tribute to his passion for golf and his never-ending thirst for knowledge that he can pass on to those who come knocking.

And as sure as leaves fall in October, Tom Cavicchi quite often is the first stop golfers from our area make on their quest to improve. “One, he knows probably more than anyone because he keeps learning,” said Hawley, “and two, he’s a font of knowledge and not long ago you generally didn’t share what you had learned, but Tom is the opposite; he likes to share.”

If you’re thinking humility, give yourself a gold star. The man is saturated in it. When congratulations were extended for having last week been inducted into the New England PGA Hall of Fame, Cavicchi said he was thankful, but surprised.

“It’s nice, for sure, but it’s not the aim of what I’m about,” he said. “But I appreciate that people have somewhat paid attention to what I do.”

What Cavicchi, 72, does is unleash a flavorful story of a life in golf. This son of a Quincy Police Department lieutenant fell in love with the game and possessed the savvy to recognize the on ramps and off ramps that would keep him immersed in it.

He sells himself way short as a player when he jokes that he went to the PGA Tour Qualifying Tournament in Texas one year “and realized I sucked.” Fact is, he played beautifully and had notable success at a time when local golf rated as front-page news in the Boston Globe sports section.

Cavicchi played against Eddie Barry and Ted Bishop and was of the same vintage as Allen Doyle, but a tad older than Bill Mallon and Bruce Douglass. In 1969 he lost a spirited first-round match to the great Fordie Pitts in the State Amateur, then a year later he got to the finals, only to see the formidable John Tosca rally to win at Essex County Club.

Cavicchi was a sophomore on Rollins College’s Division 2 national championship team in 1970 and if the individual winner of that tournament, Gary McCord, was good enough to try pro golf, why not the kid from Quincy?

Cavicchi’s eyes were opened to just how good one had to be to make the PGA Tour. The truth did not hurt because Plan B was appealing, too. “I told myself, ‘That’s it, I’m not good enough,’ but I loved the game and I wanted to teach.”

One small problem? “I needed to get better at that,” he said.

Enter his relentless appetite for learning, which was coupled with another strength – he listened to advice. Club pro Vinnie Del Zoppo offered him tutelage, and David Gianferante suggested he make a ride up to Oak Hill CC in Rochester, N.Y., to interview with head professional Craig Harmon.

That sound, folks, is the door opening. And oh, how Cavicchi seized the opportunity.

The Harmons are Golf Teaching Royalty and Cavicchi was all in. Craig mentored him at Oak Hill, younger brother Dick took him on as an assistant at River Oaks in Houston where Cavicchi spent many a night talking with the patriarch, Claude Sr. Cavicchi got to know Claude Jr., better known as Butch, and for lengthy winter stretches he caddied on the PGA Tour for Oak Hill member Terry Diehl and roomed with the youngest Harmon boy, Billy.

The game is immeasurably richer for that and golfers who have improved their games thanks to Cavicchi – be it at Oyster Harbors or Wollaston GC or the Harmon Club in Rockland – would form a lengthy parade route to sing his praises.

(When he joined with the Simeone family of Milton to give birth to a teaching facility, is it any wonder he wanted it called “The Harmon Club?”)

“He has the priceless combination of skill and passion,” said Hawley, who honed his game under Cavicchi’s tutelage and eventually played professionally in Canada and on various minitours. Now, Hawley is also a teacher and cherishes those days when he’s with a student and Cavicchi is close by with his.

“Something will spark his curiosity, and he’ll come back more excited than ever,” said Hawley.

“The bonds I have made are very, very strong,” said Cavicchi.

He was referring to all walks of his golf life – childhood friends from Furnace Brook GC days with whom he still plays golf; students from the 1980s who keep in touch; even Taylor Metcalfe, a Rollins College teammate.

“We hadn’t seen each other since 1971, but we got together in 2020 and picked right up where we left off, as if we had never been away,” said Cavicchi.

Magical. Mystical. The game is all of that, which explains why Cavicchi will find time to move onto the range by himself, passion percolating inside. “I still want to play,” he said. “I don’t want to suck. I haven’t given up.”