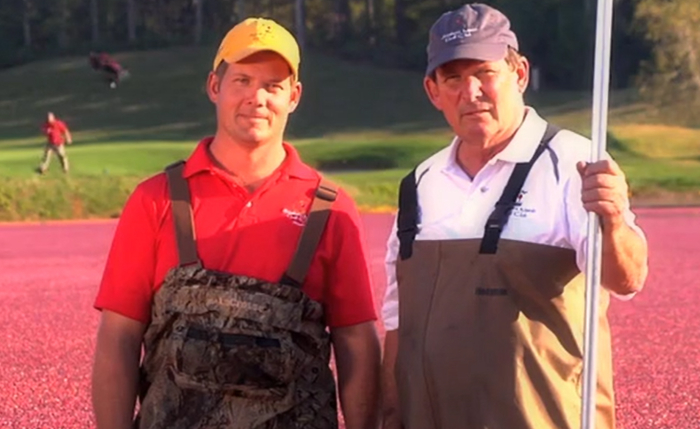 Will Stearns and his late father, Big Will (right), enjoyed making commercials to promote their unique golf course surrounded by their cranberry bogs.
Jul 7, 2021

PLYMOUTH – Were you to close your eyes to savor the memory of a man who embraced life with a bear hug and made sure his family, his friends, and his acquaintances were enveloped in his grasp to share in the inordinate laughter, the love, and one spontaneous adventure after another, what would you see when you opened them?

Likely, hundreds of people who share your love and admiration for “Big Will,” who was born into this world 71 years ago named William Bramhall Stearns III and departed 74 days ago praised as a beloved gentleman who had one last request: Remember him with smiles and laughter, not sadness.

Everyone will try, Big Will, but on Friday when Southers Marsh Golf Club transforms into a memorial arena and hundreds of people attend “A Celebration of Life,” there will be tears and, yes, pangs of sadness.

But here’s the safest bet you’ll ever have: The laughter will win out.

That’s because there are lives well lived, then there are those like Big Will who took it up four or five notches to leave a legacy that has many layers, though we start with Southers Marsh.

It is the grandest 4,441-yard par-61 course known to mankind. If you happen to subscribe to the notion that golf should be fun and inclusive to all, then Big Will’s outlandish concept for this cranberry bog next door to the Miles Standish State Forest has blossomed into one of golf’s greatest wonders, with many thousands of rounds each year putting people in love with the game.

And just think, how it began.

“So, let me get this straight,” Dahn Tibbetts, golf-course shaper, said to Big Will in 1999. “You’re going to build a golf course, but you have no help, and you don’t have any money.”

“Yeah, pretty much,” Big Will said.

“Well, OK, sounds like fun,” said Tibbetts, who probably laughed, because, let’s face it, no one made people laugh like Big Will.

The story goes that Big Will and his wife, Nancy, had been saving money for a new living room couch. After returning from a visit to see her family, Nancy discovered where the furniture fund had gone – into a sailboat, which Big Will aptly named “The New Couch.”

There is a Great Big World out there. But let others explore it; Big Will had his slice of utopia, a patch of land that he could farm in Plymouth, a town that he loved for its humble citizenry and proximity to an ocean with powerful allure.

Mystical, how this small corner of the world has had a spell on generations of men named William Bramhall Stearns, because “Willie,” who was “Big Will’s” only son, took his Harvard education (Class of ’95) and invested it in a wild three-year run on the floor of the Mercantile Exchange – “We stood the whole time, no lunch or bathroom breaks, screaming in the pit” – all for the dream of being like his father and his grandfather.

“A farmer,” said Willie. “It was the lifestyle I was used to but wasn’t available in New York. I never felt comfortable there.

“I wanted to grow cranberries.”

Big Will, of course, encouraged Willie, who bought his own bog and returned home in early ’99 – just in time for the cranberry collapse.

Housing probably made sense. But hadn’t Big Will built a makeshift course a few years earlier that offered endless entertainment for family, friends, and “The Nut Squad,” the youngsters in town who annually helped the Stearns family harvest berries?

“You could play (four, then five greens), different tees and play nine holes in 45 minutes,” laughs Willie. “It was chaotic, but it was the most fun you could have playing golf.”

Big Will proposed digging up those greens and other land around the bogs and building 18 holes. Willie lobbied for nine. Back and forth they went and, mind you, this is not a family that was steeped in golf tradition.

“We didn’t play golf. My grandfather started playing when he was 65 and never broke 100. Not sure he ever hit a golf ball more than 125 yards,” said Willie.

Ah, but work ethics and a commitment to research? Big Will and Willie were scratch. Big Will went to the local library and studied up on his grasses. Willie enrolled at the acclaimed turf school at the University of Massachusetts.

They settled on a cozy, executive course – seven par 4s, 11 par 3s. Tibbetts shaped, his colleague Nick Filla did the routing. Family friends such as Mike Pruitt and Jeff Utt joined in and helped build alongside Big Will, Willie, the sisters, and their boyfriends who became husbands and instrumental to the course (Ted Flynn and J.D. Marks).

All so vintage Big Will.

“We had an irrigation business (beyond farming cranberries), so we knew that part. But honestly, we had no idea what we were doing,” said Willie, shaking his head and laughing, because that is what you do when you remember Big Will.

“Every, single thing was adventure with my dad. If you sent him for a pound of cheese, it would turn into a story.”

The story goes that Big Will bought a classic firetruck from the town of Onset, thinking he would eventually make snow so kids could ski or sled at Southers Marsh. He also bought Willie a Christmas gift one year, a vintage Model A truck that was on a trailer and somehow survived a crash that totaled Big Will’s truck. And the beverage cart that had mechanical issues and ended up in a bog? Well, “my father was an expert at getting thing out of the bogs,” said Willie.

There will be laughter at the “Celebration of Life” because Big Will was a quintessential character. But the admiration that will flow? Well, that is owed to the character of the man, a guy who coached youth hockey, instructed sailing classes, mentored a few generations of kids, provided jobs, and was always there for advice.

Only William Bramhall Stearns’ greatest crop was laughter, which he planted and nurtured with a sense of adventure and genuine love of people.